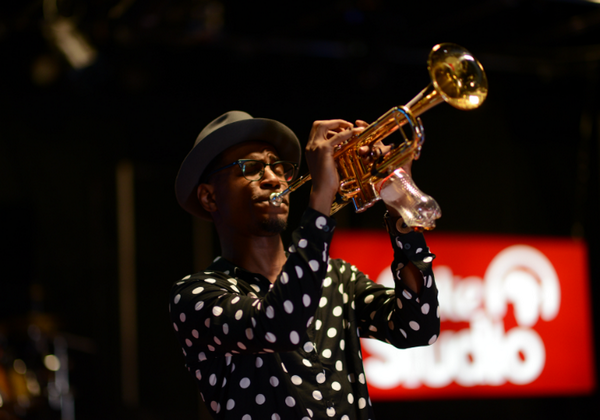 Gabiro’s fans have found more interest in his ‘Kus Kus’ jam after the attention it received from academy award winner Owuor Arunga.

Owuor Arunga could not hide his excitement when he heard this song play for the first time, the global trumpet act was spotted enjoying the African sound in an Instagram video showing he is in Seattle,America.

Owuor Arunga is a jazz trumpeter. He was born in Kisumu in Kenya and moved to New York in the early 2000s, where he studied in The New School’s Jazz & Contemporary Music Program.

From his origin as a member of the Garfield High School Jazz Band, Owuor has since played around the United States and toured around the world, including Canada, Europe and South Africa.

Some of the artist he has played or apprenticed with include Charlie Persip, Candido Camero, Billy Bang, The Cadillacs, Robert Glasper, Louis Reyes Rivera, Olu Dara, Jimmy Owens, and Chico Freeman. Arunga has also played with Seattle hip hop acts including Macklemore (The Heist), The Physics, and Black Stax.

It was a moment of instant head bobbing for the Kenyan born trumpeter while listening to the song and dancing to it with the cameras on, Gabiro in turn posted the video on his profile,his fans seem to be falling in love with the song even more after the attention it received from Owuor Arunga.

He is steadily building a reputation for Kisumu’s best lyricist, and but also shares his personal struggles through his art. From working as a matatu tout to battling drug abuse, Gabiro’s ability to tell stories separates him from rap music ‘status quo’.

While many rappers tell us their story, Gabiro possesses the ability to bring you into his world and show it you. Perhaps his most notable song, “Story” , is a story of  stories that happen in real life but they are often ignored . In dramatic fashion, this song discusses bullying, police shootings, drug abuse and political injustice. There are few artists that connect with such issues through their music.