When it comes to articulating ideas of identity, the fashion world has traditionally drawn from external and historical sources to create evocative visions. As well as that may be, a new wave of young, emerging designers are instead looking inwards and expressing their sense of self in ways rarely seen before.

In Johannesburg, designer Thebe Magugu has used his collections to preserve and share South African culture. In London, British designer Supriya Lele mines her Indian heritage to create universally flattering silhouettes, while the rising label Chopova Lowena seeks out Bulgarian deadstock fabrics to create its signature folkloric skirts. Drawing on their individual heritage to champion diversity, these designers widen the fashion lens in ways worth applauding.

As distinct as traditional Indian dressing and 1990s minimalism may seem, these opposing forces come together memorably in the hands of the British designer Supriya Lele. Known for her layered silhouettes that flatter all female forms, Lele began exploring her Indian heritage while studying fashion at London’s Royal College of Art (she graduated with a master’s degree in 2016), where she also realised the importance of experimentation in her creative process.

She realised that ‘the only way I can work is in 3D, on the stand, by draping’, she says. The process ‘really set the tone for what I wanted to do going forward’.

Lele was selected to show her graduate collection with the pioneering design incubator Fashion East. Her debut at London Fashion Week in 2017 was staged at Tate Modern, and she continued to show under Fashion East’s stewardship for the next three seasons. In 2019, Lele was sponsored by the British Fashion Council through its NewGen initiative and in 2020, she took home part of the LVMH Prize Fund, which was split equally among eight finalists (also including label Chopova Lowena, see opposite) for the first time.

Industry success aside, Lele’s brand of female-centric inclusivity could not feel more sincere. Her S/S21 collection exuded a panache inspired by how her all-female team dressed immediately after the first round of lockdown restrictions had eased.

Despite the logistical challenges of its creation, the collection encapsulates a youthful sexiness. Minimalist silhouettes are amplified by vibrant shades of azure blue and fuchsia; lingerie-inspired details such as delicate ties gingerly hold up draped tops and dresses; and embellishments such as sequins and lace add finesse. Several bright, Madras-check pieces were cut from fabric sourced from Lele’s grandmother’s favorite sari shop in Jabalpur, in the central Indian state of Madhya Pradesh.

‘What the pandemic has done is bring people together,’ Lele reflects. ‘Everyone has gone through this together and there’s an openness to the fashion system changing; to people showing in their own way and different methods. I think we all really needed that break in the cycle and rhythm.’

Emma Chopova and Laura Lowena transform overstock and deadstock Bulgarian fabrics into oversized Victorian-style blouses and accordion-pleated skirts festooned with carabineers and large buckles. Their work is a triumphant celebration of heritage, cleverly transposed into a contemporary context.

Chopova, who was born in Bulgaria but grew up in the United States, and Lowena, who hails from Somerset in the UK, share a passion for craft and sustainability. ‘I became very interested in Bulgarian dress when I started my BA at Central Saint Martins in London and met Laura,’ says Chopova. ‘I was collecting and wearing traditional dress, but it wasn’t until we did our MA together that we started using Bulgarian references in our work.’

With an archive that spans wall hangings, needlepoints and aprons, the duo’s approach is highly individualised. ‘For us, it’s about having the right product in mind and the right usage for it,’ says Chopova.

The pair dissociate the fabrics from their origins by juxtaposing them with utilitarian silhouettes and sporty embellishments. For S/S21, they invited artists and craftspeople to contribute, a collaboration that resulted in jeans printed with painterly designs and T-shirts featuring abstract imagery made from cut-up Bulgarian postcards.

Originally from the South African mining town of Kimberley, Thebe Magugu moved to Johannesburg to study fashion at LISOF. The 2019 winner of the LVMH Prize, he continues to fly the flag for African culture and provenance, using his eponymous label to highlight social issues, local standards of production, and the potential for growth.

‘I think African stories have often been told by people who aren’t African, and thus distort accounts for their own agenda,’ says Magugu. ‘The collections are inspired by real people and their stories; stories that are often missed in the history books.’

These include the human rights activists of Black Sash, who inspired Magugu’s S/S19 collection, and spies who worked for and against the apartheid regime, whom he interviewed for his S/S21 offering. The resulting collection brims over with hidden details, including patterns developed from the fingerprints of a former spy, and a print featuring official confessions provided by the South African government.

‘Instead of working abroad, I want to create something for us, by us. I think this sentiment, now more than ever, is shared by many designers working on the continent,’ says Magugu, who launched his online store. 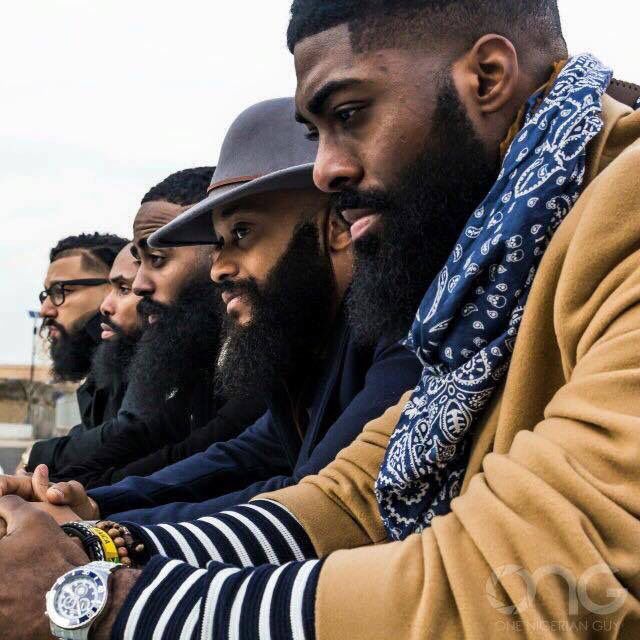 The full beard used to be the most popular beard style for black men, and for good reason,The good news is that what was old is new again, and this classic beard style has been making a resurgence in recent years.
Regardless of the haircut or hair growth pattern, the full beard can be shaped and sculpted to go with just about any face. Men with high-coiffed hair will be able to pull off this look easily.
The full beard is also popular with lovers of vintage styles who can appreciate this aged look.

Make no mistake about it, a five o’clock shadow will make any man look irresistible,Today, men of all ages are in search of the perfect three-day-old beard because it gives the appearance of the five o’clock shadow.
Don’t get fooled by this laid back and lazy look because it does require some serious maintenance to pull it off successfully.
The cheek and neck area must be shaved on a daily basis in order to master the look, while a quality beard oil will help to give the rest of the facial hair that relaxed cool appearance.
Trim the beard every three days to maintain this incredibly sexy look.

One of the most popular beard styles for black men today is the manly goatee beard,The biggest appeal for guys with the goatee beard is that you can sculpt it in different ways but still get the desired look.
Black guys who have rounded faces can really make the most of this beard style by incorporating and connecting it to the mustache.

Regardless if you trim the edges thin or let them go thicker, the goatee beard commands attention especially when it is allowed to reach its full potential.

One of the more appealing beard trends in the African-American communities is the short beard.It might appear on the surface that men with black skin would not be able to pull off the shorter beard because it blends with their skin color, but it actually helps to give them a look many women and men actually prefer.

The trick is to let the beard grow out longer than three days to get past the sloppy stage. Once it has grown out for a week or more, the beard will line up and become more symmetrical.

Young men are sporting the carved beard because it better allows them to express their own unique personality,This sculpted beard style features perfectly shaped contours that require dedication and skill to master.
A precision trimmer or razor are used to sculpt the cheekbones, goatee, neck, and mustache. It is best suited for men with dense beard hair.
Be prepared however to be working on your beard daily to maintain this look. The extra work will definitely pay off in a huge influx of attention.

Read more on the next page.