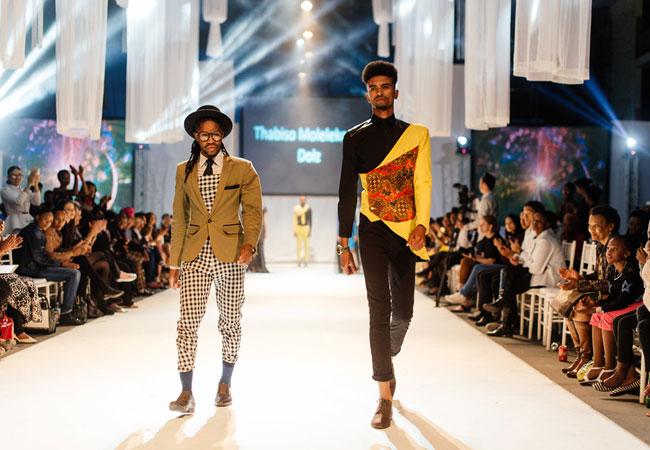 Two years ago, when everything came to a halt, it still seems like yesterday. We couldn’t even go out and get refreshments or go to activities since we were confined to our homes.

Top three Classic Racewaer for Men (from left):Second placed designer Martin John Steenkamp with model Emmanuel Kucherera, first placed model Qurin in a creation by Sipho Mugazi, third placed Mnotho Ngema in a creation he made at the 2022 Hollywoodbets Durban July at the #HDJ2022 pic.twitter.com/4JPQOs1USB

Although it was difficult, we had to do it for the sake of our own and others around us. We never anticipated this day would come so quickly, yet two years later, we are able to leave the house without a mask.

Due to spending so much time inside starting in March 2020, the majority of people were forced to pack away their fashionable attire in favor of something more comfortable.

It’s time to dust off those fashionable outfits and display your innovative sense of fashion now that events are open.

As a result, prepare ready for some of the country’s hottest fashion shows, which will take place between September and October.

Durban Fashion Fair
The Inkosi Albert Luthuli International Convention Center will play host to the 10th annual Durban Fashion Fair from September 21–23 as part of eThekwini Metro. Along with the well-known designers, this year’s exhibition will feature student designers who are a part of its mentorship program showcasing their creations on the runway.

And we’re off to the races 💃🐎#HDJ2022 pic.twitter.com/QvJOQnVWjL

Before showcasing their collections to a larger audience of fashion buyers, the media, critics, and the general public at the fashion fair, the student designers are required to critique each other’s work as part of their weekly assignments under the guidance of Fezile Mdletshe, managing director and founder of the Fezile Fashion Skills Academy.

Mxolisi Kaunda, the mayor councilor of Ethekwini, is pleased with the program’s continued growth.

Our goal was to identify new talent and offer the required mentoring to promote self-employment by honing designers’ abilities so they might in turn produce jobs for others.

“As All Black Soiree, we are thrilled and honored that Candy Smith has given us the chance to collaborate with such an incredible company as Free State Fashion Week. one that breaks down historical entrance barriers in an effort to economically, creatively, and socially emancipate young people. According to Rapelang Khati, chief operating officer of All Black Soiree, “We look forward to a long-lasting cooperation that will give rise to various prospects.”

Award-winning TV and radio personality Lerato Kganyago, “Ask A Man” host on Metro FM, “Young Famous & African” star Naked DJ, and world-famous medium and life coach Taz Singh are just a few of the people that are anticipated to attend the event.
Additionally, designers will present collections based on the “Be Human” concept at the fashion show, which was motivated by surviving a global pandemic and moving on after it.

“This year, I want to inspire our fashion business owners to “Be Human,” take a deep breath, and pause for a moment. That is the exact goal of the theme for 2022. Everyone in the world has experienced a great deal in both their personal and professional lives.

We must stop for a moment to breathe, then begin again with renewed vigor. It’s time to recover from the pandemic’s losses and reclaim our rightful positions while still managing to “Be Human.” This year’s designs from various designers will undoubtedly reflect this, according to Smith.

The start of October is typically when South African Fashion Week holds its fashion shows, however, this has not yet been confirmed. The entries for the Scouting Menswear Competition are being processed right now.

The SA Fashion Week Scouting Menswear Competition seeks for the nation’s top up-and-coming menswear designers to showcase them to the media, buyers, and people who helped them break into the retail industry. On July 20, 2022, the competition’s semi-finalists will be revealed. The JW Show 2020 edition held last night at Nairobi Film Centre formally know as ( Nairobi Cinema ) was successfully event and one of the big show in East & Central Africa #MadeinKenyaByKenyans, the show had quite and inspirational panel for fashion designers and literally every young person who inspire future generation.

The JW Show gave opportunity to  11 fashion designers from Nairobi with a mix of students and upcoming designers unlike last year when they went scouting for talent from the counties level.

Unlike the previous edition where showcasing designers were competing for a prize, this year show was one simple platform for unveiling  new talented participants. All collections on the runway come with face masks.

The organizer of the event added a panel discussion where they generated and share ideas on how they can support upcoming designers and keep them on their feet.

Once again the Jw Show, gave opportunity to persons living with disabilities in the fashion industry who have been left behind during this pandemic and they want to make sure their valuable input is seen and appreciated.

This year the show was keen on the quality of the fabric employed in designs and creativity of the designers, each designer to showcase at least five collections.

Kenya Film Classification Board  ( KFCB ) has been partnering with the JW Fashion Show for three years in a row. The vast creative sector is the next frontier for wealth and job creation.

It’ been tough to persuade sponsors to come on board  because people’s finances have been affected by the pandemic. But we are very grateful to Kenya Film Classification Board (KFCB) for believing in us. ~ Jw Show Founder Jeffrey Wilson

Organizers of Jw Show were planning on bringing in three designers from Rwanda, Nigeria and South Africa, but the pandemic came in the way of it. and the plan has been pushed to next year were we will see international designers showcasing at The JW Show 2021 edition. 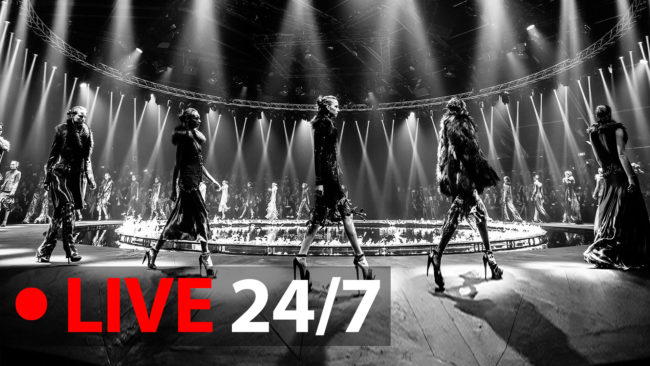 The Bulgarian incumbent telco Vivacom has entered into an agreement with Fashion TV to distribute the channel on pay-TV platforms across Africa on Eutelsat 8W.

Fashion TV was launched in France in 1997 and is currently distributed worldwide on over 50 satellites, cable and IP networks, for Fashion TV Africa, it is adding blocks which focus on African fashions and lifestyles.

FashionTV is an international fashion and lifestyle broadcasting television channel. Founded in France in 1997, by its Polish-born president Michel Adam Lisowski, FashionTV is a widely distributed satellite channels in the world with 31 satellite and 2,000 cable systems. As of 2014, it had 400 million viewers around the world, including 80 million in Arab countries.

FashionTV is a multi-media platform offering a review of global fashion and is independently owned and operated from the headquarters in Paris, London and Vienna. The company has continued its mission to promote progressive people and trends within the African Diaspora. Ankara Miami’s launch event, Ankara Miami 2012.

1st Annual Ankara Fashion & Cultural Show, showcased emerging and established designers from the African Diaspora and their use of Ankara (a well-known West African fabric) as well as other African fabrics and prints in mainstream Western fashion.

Since its inception, Ankara Miami has also made social and financial contributions to entities such as the African Heritage Cultural Arts Center, HANDY, Inc., the Nigerian American Foundation, Embrace Music Foundation, and Honey Shine, Inc. Its year-round events have included toy drives, networking mixers, and consulting/event management for other African and African-inspired events.

In its exciting journey, Ankara Miami organizers will continue to feature even more talent from Africa, Europe, the Caribbean, and throughout the United States, and provide a medium that encourages buyer/investor relationships, highlights talent and progression within the African Diaspora, and facilitates networking opportunities between established industry professionals and aspiring newcomers.

Stay connected as Ankara Miami continues to heighten the awareness of the modernization of African culture on a local, national, and international platform. 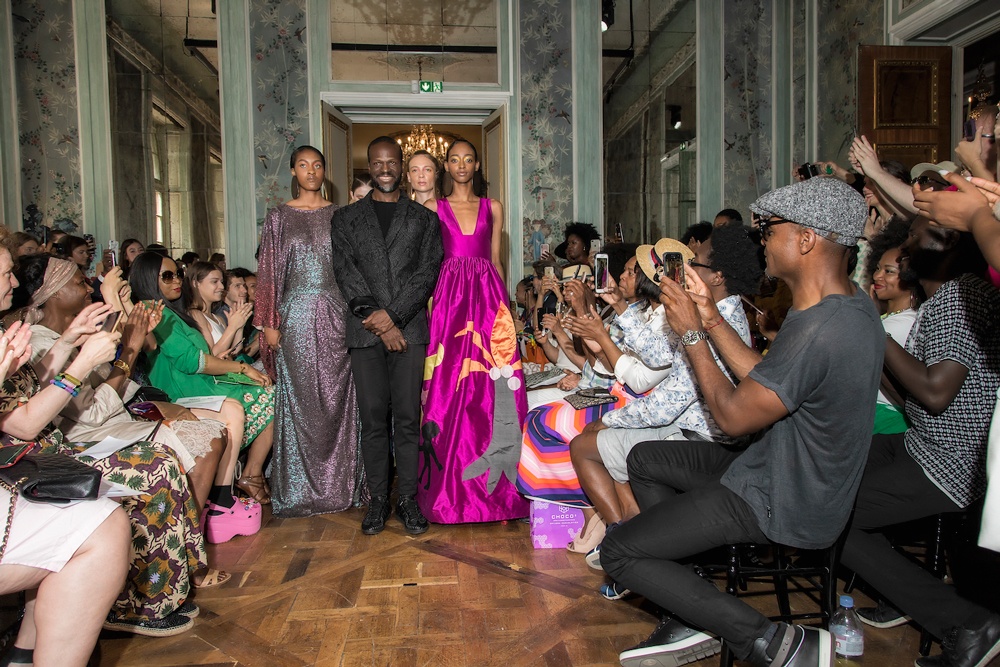 Cameroonian designer Imane Ayissi made history last Thursday by becoming the first African designer to show his clothes on the elite Paris haute couture catwalk.
“I’ve worked very hard to get to this point. It was my third time trying and it worked! It was a very touching moment,” he said of the Fédération de la Haute Couture et de la Mode’s (FHCM) strict rules and regulations.

As widely known, only a few of the world’s most prestigious luxury labels including Dior, Chanel and Givenchy have a right to call their clothes haute couture, but Ayissi is the first designer from Sub-Saharan Africa to be invited to show an Haute Couture collection.

Both Saint Laurent and former FHCM chairman Didier Grumbach endorsed his candidacy and pushed for his profile to be accepted as part of this season’s calendar.
Cameroon-born Ayissi, 51, a dancer, performance artist, model and now couturier is a champion of traditional fabric and techniques from his homeland.

Ayissi said his mission is to show how hugely diverse African cultures are. “I am so proud that I can show my work and showcase real African fabrics and African heritage,” he told AFP .

According to Ayissi, who refuses to use West African wax prints due to colonial ties, “when we talk about African fashion, it’s always wax, which is a real pity because it’s killing our own African heritage.”

Ayissi told AFP he wanted to open up “a new path for Africa” and find an “alternative way of doing luxury fashion”.
Every one of his pieces is painstakingly handmade per the criteria of haute couture.

He uses local materials like the strip fabric kente woven by the Akan people of Ghana and Ivory Coast, which was originally worn only by nobles. He also uses African luxury tropes by using a Cameroonian tie-dye technique referred to as “Mon mari est capable” translated as “My husband can handle it”.

As the son of an African boxing champ, Jean-Baptiste Ayissi Ntsama, and the first Miss Cameroon following the country’s independence in 1960, Ayissi is making Africa proud by joining the fashion’s creme de la creme with his African skills.

He credits his mom for his love for fashion. “She’s so elegant, not only because of her fashion but the way she carries herself – she emanates strength and grace,” he told Vogue.

“Within the family, we had boxing and dancing clans, and a bit of modeling too, and mother loved all that,” the designer said. “I did a bit of boxing, it was obligatory, it was the family tradition, after all, then I started to dance,” he said.

Ayissi had relocated to the French capital to work as a dancer and model walking for the likes of Dior, Givenchy, and Lanvin until he started his own label in 2004.

For Spring/Summer 2020, the designer used raffia, threads from Burkina Faso, and indigo dye from Cameroon coupled with fermented mud which has been described as infinitely more luxurious than the materials sounds.

To add sophistication to his African collection, Ayissi even used a highly sophisticated hand-woven material decorated with “obom”- the bark of a tropical tree.

His collection which shows his craftmanship has gotten him in the door of the extremely select haute couture club and brought him to an exalted position regarded as a rare rite of passage in Paris.

Haute couture shows only take place in Paris and the criteria to enter and remain in fashion’s elite club are strictly enforced by French law.