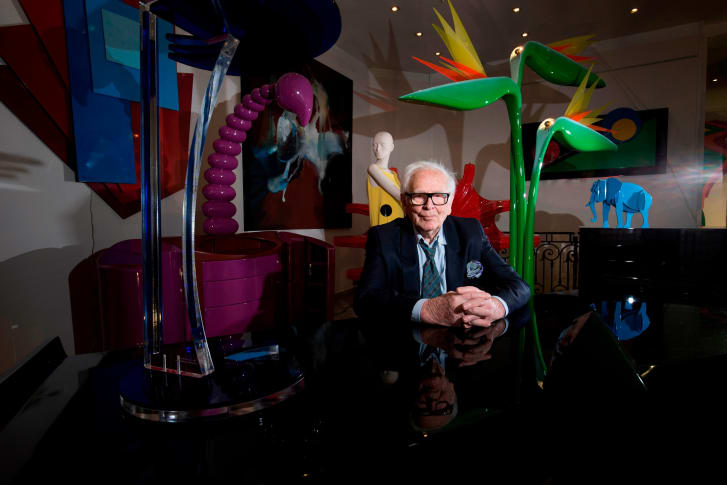 Legendary French fashion designer Pierre Cardin died Tuesday at the age of 98 at a hospital in Neuilly in western Paris, his family told AFP.

Born on July 7, 1922, in Venice, Italy but emigrated to France as a small child, Pierre Cardin was known for savvy business moves and his space-age designs that made him highly successful

Iconic French designer Pierre Cardin, who was hailed for his avant-garde styles in the 1960s and 70s, has died at the age of 98, according to the French Academy of Fine Arts. The academy did not give a cause of death or say where or when he died.

Cutting his teeth working at top couture houses such as Christian Dior, Cardin went on to launch his own brand and pioneered the use of licensing in fashion, plastering his label’s name on products of all kinds. His savvy business sense brought him a mix of admiration but also scorn from fashion purists at the time.

In the 1960s and ’70s, he upended traditional fashion with his futuristic, avant-garde looks. He became known for his visionary creations, shaking up fashion with bubble dresses and geometrical designs. Cardin was also one of the first to bring high fashion to the masses by selling collections in department stores beginning in the late 1950s.

While he no longer presented runway collections in his later years, Cardin remained active in the industry, attending parties and events and taking young designers under his wing.

He had previously been a mentor to prominent designers such as Jean Paul Gaultier.

According to Reuters, “In a career spanning more than 60 years, Cardin drew scorn and admiration from fellow fashion designers for his brash business sense. He maintained that he built his business empire without ever asking a bank for a loan. Cardin was the first designer to sell clothes collections in department stores in the late 1950s, and the first to enter the licensing business for perfumes, accessories and even food – now a major profit driver for many fashion houses.”

According to Britannica.com, Cardin’s father was a wealthy French wine merchant who wanted him to study architecture but he was interested in dress designing. After World War II, he joined the Parisian fashion house of Paquin, where he helped design costumes for Jean Cocteau’s film Beauty and the Beast. He also worked at the couture house of Christian Dior.

“I had a sense for marketing my name,” Cardin had told Germany’s Sueddeutsche Zeitung newspaper in 2007. “Does money spoil one’s
ideas? I don’t dream of money after all, but while I’m dreaming, I’m making money. It’s never been about the money.”

Pierre Cardin died at the honorable age of 98 in France today. He'll be remembered for his futuristic designs and cutouts mixing futurism of the 60's with the minimalism trend going on in France at that time. pic.twitter.com/ZgJVVGsDIz

He was most noted for his stark, short tunics and his use of vinyl, helmets, and goggles in the 1960s, which helped launch the so-called space-age look. Cardin later became famous for licensing his name for use on a variety of products (such as sunglasses). The practice of licensing subsequently became common for fashion designers.

Gowns and bodysuits in fluorescent spandex were fitted with plastic hoops that stood away from the body at the waist, elbows, wrists, and knees. Bubble dresses and capes enveloped their wearers in oversized spheres of fabric. Toques were shaped like flying saucers, bucket hats sheathed the model’s entire head with cutout windshields at the eyes, reported AP.

For his latest venture in February this year he teamed up with a designer seven decades his junior. Pierre Courtial, 27, unveiled a collection at Cardin’s studio on Paris’s chic Rue Saint-Honore, with pieces that echoed some of the veteran designer’s geometrical aesthetics.

Cardin said he still rated originality above anything else.”I’ve always tried to be different, to be myself,” Cardin had told Reuters. “Whether people like it or not, that’s not what matters.”