To grow his family, Nick Cannon is genuinely unstoppable. On June 28, the presenter welcomed his eighth kid with Bre Tiese. Two months later, he revealed he is expecting a new child with Brittany Bell.
Bell and Nick already have two kids: daughter Powerful, 1 and son Golden, 5.

On Wednesday, August 24, he released a video during the very pregnant Pepperdine grad’s maternity shoot in which he shared the news. He captioned the photo, “Time Stopped & This Happened.”

While Tiese was still pregnant, TMZ announced in June that he and Abby De La Rosa were expecting their ninth child. Bell is undoubtedly past the three-month mark, so all three of the women simultaneously had a Nick Cannon bun baking.

But we shouldn’t be too shocked. “Let’s just put it this way… the stork is on the way,” Nick said on Angela Yee’s Lip Service podcast the week De La Rosa announced her pregnancy. “If you thought it was a lot of kids last year,” he said.

After losing his seventh kid Zen to a brain tumor at the age of five months in December 2021, the Wild n Out host is left with seven living children. Alyssa Scott was Zen’s mother.

Tiesi and Nick made the pregnancy announcement in January, the following month. He and his ex-wife Mariah Carey are also parents to 10-year-old twins Moroccan and Monroe.

Nick has experimented with the notion of getting a vasectomy and even scheduled a consultation. We will have to wait and see whether he ever decides enough is enough, even if it is obvious that he did not follow through with it.

After revealing the birth of his tenth child, the musician launched “I do,” a new single with Chris Brown. At the time of publication, Bell had not made the pregnancy public. 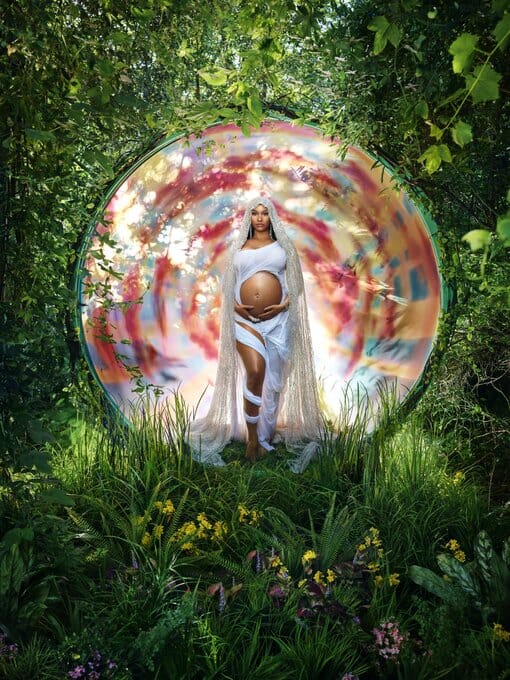 Nicki Minaj revealed that she’s expecting her first child with husband Kenneth Petty. Get the details on her pregnancy announcement!

She is going to be a new mom!

On Monday, July 20, the superstar rapper took to Instagram to confirm that she’s pregnant. In a series of photos on the social media platform, a bikini-clad Minaj can be seen cradling her baby bump. The 37-year-old star captioned one of her posts, “#Preggers.”

This will be her first child with husband Kenneth Petty, who she wed in Oct. 2019 after more than a year of dating. As fans might recall, Minaj and Petty obtained a marriage license in July 2019, months before officially announcing the news.

“I think I have what I was striving for, just happiness,” Minaj previously confessed. “It was so hard to get to a happy place. Now that I’m there, I don’t want to compromise that for anyone or anything.”

Minaj has also previously shared that she was looking forward to becoming a mother and was willing to give up her career to achieve that dream.

“I’ve decided to retire and have my family,” she tweeted in September 2020. “I know you guys are happy now.”

She later said in May that she was “throwing up,” experiencing “nausea and peeing non stop,” which prompted questions about whether she was pregnant. She wouldn’t confirm or deny a pregnancy, but when asked if she would share a pic of her baby bump, she responded, “Yea in a couple months. The world ain’t ready yet.”

Sheraton Hotel Kampala was the place to be last night as the search for the new Miss Uganda was on, Oliver Nakakande, emerged the best beating 21 contestants to the crown.

This event was a special one as it was graced by the presence of the Chairman and CEO of the Miss World Organization, Julia Evelyn Morley and Vanessa Ponce De Leone the current Miss World.

All was well up to the time of declaring the winner. Miss World, Vanessa Ponce De Leone, Quiin Abenakyo, Zari and the Miss Uganda CEO, Brenda Nanyonjo were on stage for the unveiling moment.

Zari, who doubled as a judge and patron explained what criteria they were using to come up with the winner and as she was still explaining, the show host, Anita Fabiola interrupted her speech and very quickly summed up what she was saying in one line;

“Ok, fantastic, clearly the judges are not just looking at beauty, they are looking at intellect, ability to answer questions while under pressure…alright, let’s move on.”

“We have our top three in this envelope, MAMA, are you going to do us the honors…”

As if interrupting her was not enough, calling her MAMA must have not gone down well with Zari. She is a mom of five, but Fabiola could have been safe if she had referred to her as Zari the Bosslady or Mrs. M now that she is newlywed.

“No you are supposed to do that admin work here” (she passes on the envelope while facing the other side), but Anita was reluctant.

It was then that Brenda Nanyonjo realized that the roof was on fire because the two, Anita Fabiola, the show host and Zari the judge were all not willing to open the envelope, she opened it and gave to Zari to read out.

Zari had started reading out, but then again, she paused and called Anita Fabiola to the front, this time in a more polite manner, something that put a smile on Anita’s face.

“You know what, I don’t do admin work…” Zari said again.

It was then that the audience started booing her down, they were too loud that you could hardly hear what she was saying.

“Hold on, Hold, I got something to say…May be I pulled a stunt on her and I wanted to see how she was going to react,” Zari added.

The audience was not taking any of that, they continued to boo her down, the efforts of her convincing the audience to be calm were falling on deaf ears, she kept on stressing her point, anyway.

Anita Fabiola who was armed with the second cordless mic tried to comment on Zari’s actions;

“This is not the time and place…”

And no sooner had she started talking than Brenda Nanyonjo grabbed the mic from her to prevent the situation from becoming worse.

Zari still had her mic.

“I still stand my ground, as women, we are supposed to be listening to each other, me and Fabiola, we are going to read out the names together.”

Fabiola had to very quickly stop the ship from sinking as she could not take the direction Zari had taken, she very quickly apologized.

“We are here to celebrate Queens and Miss Uganda, Ladies and Gentlemen, Miss Uganda 2019 and the queen lady that will represent Uganda at the Miss World is…Olive Nakakande,” Anita concluded.

Many have since commented about the melee that happened last night and these are some of the comments;

“Madam boss not everyone wants to see your boss lady attitude. This was immature of you and very elementary, Fab as your name, you handled this meticulously.”

“This was triggered after Fabiola called her Mama.”

“My love for Fabiola has increased, she is young, but behaved so mature in front of everyone, Mama, fell short here…”

“The level of pettiness exhibited by Zari is appalling. She doesn’t want to give the young lady a chance to shine.

“But Fabiola was Just an MC and Zari was still giving her speech and then Fabiola came in asking mama are you gonna read or, So how did you expect Zari to react? This is what she had to do!”

“Being Bossy at an invited ceremony. These are the things Diamond Platnumz was talking about and why force an accent?”

This is coming after her baby daddy, Diamond Platnumz, had just left the country after performing on Thursday at the Comedy Store.