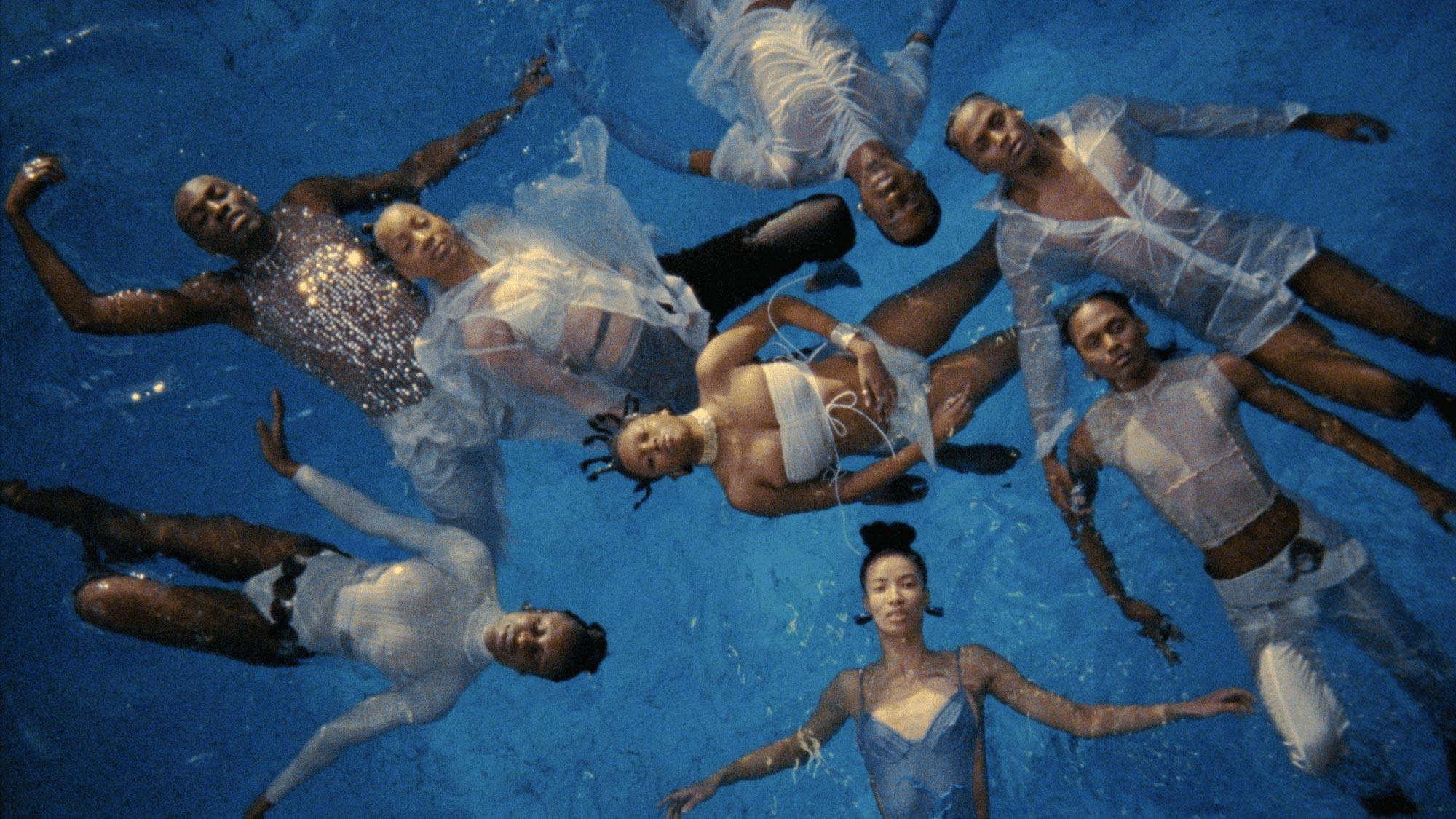 They discussed the importance of “looking back to those who came before”, and eventually Yamusangie suggested they take a look at the story of Mami Wata, an old ancestral myth rooted in traditions of the African diaspora. It became a point of entry for this film, made in partnership with Gucci. WATA, Yamusangie explains, is centered on “the stories that we have heard and how those stories directly reflect us and our lives, as people and as artists.”

Mami Wata is a water spirit, who according to lore is often seen carrying expensive baubles like combs, watches, and coins. Her most prized object is a mirror, which serves as a conduit for time travel, movement from the present into the future. Those who gaze into this mirror are magically empowered to manifest their deepest desires.

“Opening in deep blue, our film introduces the dynamic between ‘Mami Wata’ and ‘The Musician’, who is enticed by Mami Wata’s jewels,” says Mckenzie. While working on the film, both artists were thrilled to learn more about how their storytelling practices intersect, knowing already that they shared similar “sensitive tendencies toward color,” explains Yamusangie, whose paintings informed some of the scene compositions.

The two thought a great deal about how they might translate the force of water visually. They decided to cast a crew of dancers, “Wata Souls”, to bring the element to life. They worked with Abdourahman Nije, a choreographer whose passionate, pulsating approach to movement helped them communicate as a unified force. There was plenty of rehearsal, but on the day of the shoot Nije invited them to “forget everything they’ve learned, and just let it flow.”

“What intrigued us most were the stories people told after interacting with Mami Wata, claiming to have experienced improved health and increased wealth. We were interested in the ‘disappearance chapter’ where no-one seemed to know exactly what had happened, just that their lives were somewhat better after the interaction,” says Yamusangie.

They interpreted this “disappearance chapter” as “a dream and confrontation,” with previous generations as Yamusangie puts it, adding “for us, these moments symbolize a respectful regard for our origins and ancestry, they are us accepting these histories and using them as a means for connecting with each other. [It is] a celebration and appreciation of our rich culture and African heritage, our freedom of experimentation, our lives in London.”

Both directors were delighted to see how much this story resonated with the rest of their team, especially music supervisor Melo-Zed, who alongside Roxanne Tataei, Birame Seck and Boofti composed an original score for the film. It’s about “us sharing and connecting with those around us, and enjoying creating newness inspired by what’s passed,” says Yamusangie.

They felt truly aligned after hearing “the horns, the elongated introductions, the rhythm switches and how the music didn’t adhere to a set structure but created its own,” shares Mckenzie, describing a logic that drives every aspect of the film. “Everyone had their own personal interpretations and connections, creating their own small stories within the larger one.” Their ultimate accomplishment was creating space for community, says Yamusangie. “It was more than just a collaboration between the two of us.”

The hope is that WATA will be the first of many shared projects; they are currently developing a joint exhibition featuring their respective mediums. “Collaborating in this way being artists from completely different practices has allowed us to learn about each other’s processes.” Even though, as Yamusangie says, they’ve “always translated our intent in contrasting ways,” they enjoyed negotiating those differences and discovering their similarities.

Mckenzie agrees, adding “We’ve allowed the knowledge within our respective fields to flow between us and bond to create this moving image art piece that we feel represents us both in strength and in equality. Our film is about appreciation, communication and sharing, and our collaboration is a testament to the very bones of what makes up WATA.” 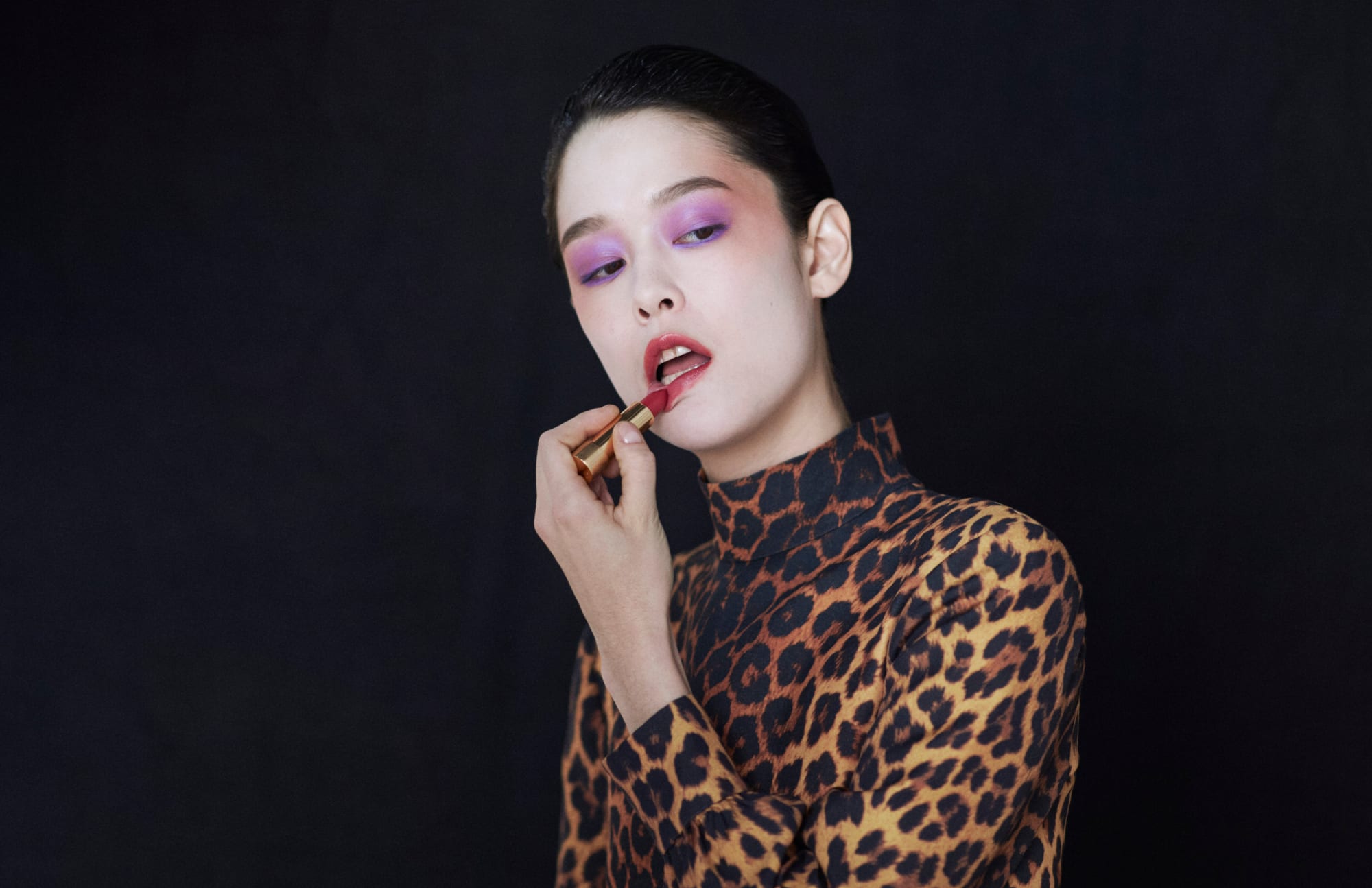 Ever since Gucci launched a dedicated Instagram feed for beauty last fall, the industry has been anxiously anticipating Creative Director Alessandro Michele’s reimagined vision for the Italian house’s cosmetics range.

After months focusing on fragrance and a fun campaign to go with it Gucci has turned its attention to makeup with a 58-piece lipstick collection featuring three different formulations.

On Sunday, Gucci released its latest beauty campaign, photographed by Martin Parr. Described in a press release as “a manifesto of beauty written by the house’s creative director,” the images feature Dani Miller, the lead singer of punk band Surfbort, as well as models Mae Lapres, Achok Majak and Ellia Sophia Coggins.

The ’80s-inspired campaign is an homage to Michele’s off-kilter sensibilities and penchant for quirk; it’s meant to communicate that “makeup should not mask, but rather exalt, flaws and make them part of the language of beauty,” per press materials.

There is also an accompanying campaign film, shot by Chris Simmonds, which draws on the same vintage aesthetic and encourages the audience to be “bold, bright and beautiful,” via a voiceover.

The campaign, with its throwback graphics and gritty rawness, is certainly bold. It’s meant to “convey a clear message that authentic beauty lies in imperfection,” and it does so in part by showing close-ups of models and mouths that look different less polished, less perfect, less bleached, far more realistic than most of what the beauty industry visually sells consumers.

While some Instagram commenters shared their shock (and in some cases, disdain) for seeing such images from a beauty brand, others, like anonymous watchdog collective @EsteeLaundry, applauded Gucci for celebrating “dental diversity” in its campaign.

The Gucci lipstick collection is available as of Monday exclusively at the Saks Fifth Avenue’s New York Flagship and will launch nationwide on May 29 on Saks.com.