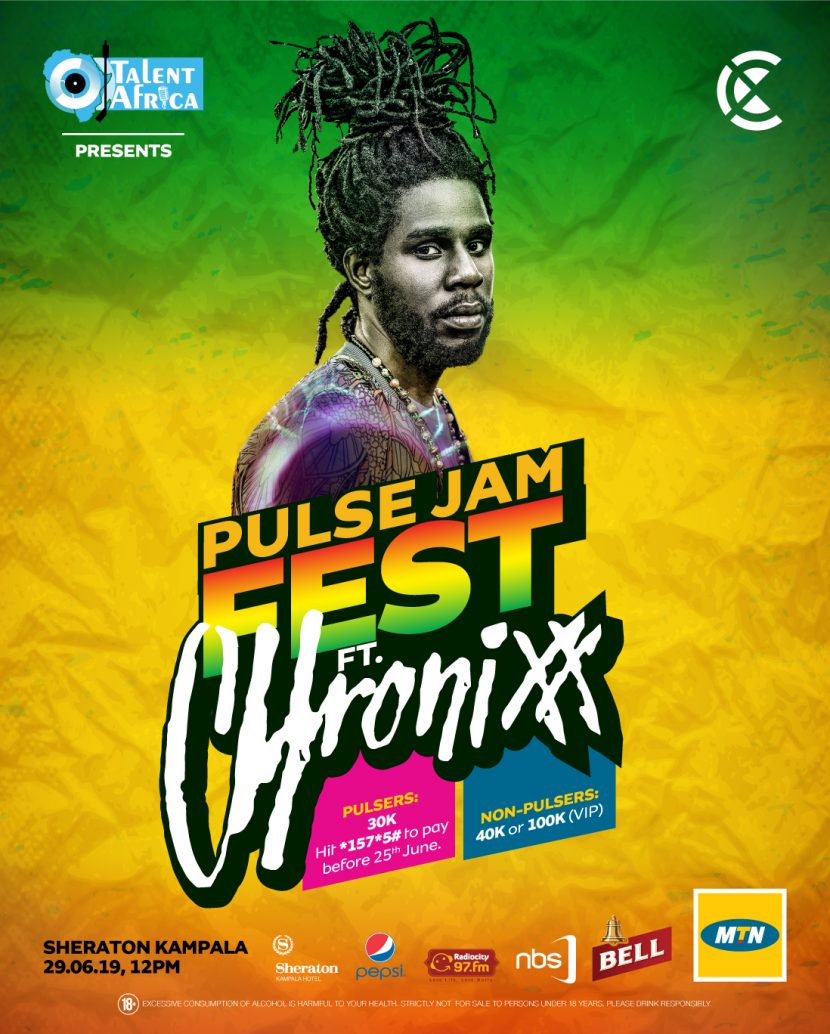 The highly anticipated Pulse Jam Fest is happening this Saturday June 29th at the Sheraton Kampala Hotel gardens. The first edition of the new music festival will be headlined by Jamaican reggae superstar Chronixx and his band Zincfence Redemption.

Chronixx was born Jamar McNaughton in De La Vega City in Spanish Town, Jamaica. His father exposed him to music at an early age, and he took an interest in production, inspired both by reggae artists and hip-hop producers. During the past five years, Chronixx and a handful of associated artists (Protoje, Jesse Royal, Jah9 and Kabaka Pyramid) have become known as the “Reggae Revival” movement.

They have sought to integrate modern dancehall with the foundations of Jamaican roots music sonically, and to highlight cultural themes in their lyrics. Currently Chronixx is one of the world’s top selling reggae acts and has been playing the biggest international music festivals such as Coachella, Glastonbury, SumFest and many more. Chronixx has quietly built his own movement that has positioned him as one of the biggest musical exports from Jamaica.
Chronixx returns to Uganda for the second time, he was last here in 2016 when performed at a sold out show at the Ndere Centre where he delivered impressive two hours live band performance that had the audience yearning for more.
The Pulse Jam Fest is the newest music festival to happen in Kampala city.
The main stage will feature a heavy line up of some of Uganda’s top reggae/dancehall artists including Maddox Sematimba, Cindy Sanyu, Weasel, Beenie Gunter, Vampino, Nina Roz, Nutty Neithan and Raba Daba. The DJ stage will feature sets by Sir Aludah, Naselow, DJ Ciza, Deejay Jo, DJ King, Ras Brown and many others.
Gates open and entertainment starts as early as 12pm on Saturday afternoon. General tickets are on sale for 40k while VIP tickets are 100k. Tickets are available from the Sheraton Hotel lobby, Definition Shop, Yujo Shop, MTN Service Centres Acacia Mall and MTN Service Centre Forest Mall.
Tickets are also available online at www.quicket.co.ug and via MTN Momo at *157*5# The Pulse Jam Fest is presented by the leading entertainment & event company Talent Africa in partnership with the telecom giants MTN Uganda. The event is also sponsored by Bell Lager, Pepsi Cola, 97fm Radiocity, NBS Television and the Sheraton Kampala Hotel.